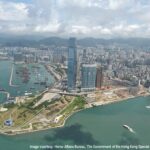 The Park will provide a major green open space in the heart of the city and a waterfront promenade which wraps the entire headland, offering spectacular views over Victoria Harbour.

It will also house a series of small-scale arts and cultural venues; an intimate small scale theatre for standing and seated events and an outdoor stage capable of welcoming over 10,000 standing visitors for large-scale performances and festivals. The Park and its related venues will act as a test-bed for creative programming across all genres in arts and culture, aiming to be perceived as a destination and a venue in its own right, and will include the first automated bicycle rental system in Hong Kong.

Working with the local partners DLN and ACLA *, West 8 will commence work on the development of a master plan for the Park and related venues, with an initial concept design expected to be unveiled this autumn. The scope of work include administeration of the construction project across the whole park site, design the Freespace venues and work in collaboration with the architects for the Arts Pavilion to decide on the best location for this venue within the overall scheme, and liaise with the M+ design team (Herzog & de Meuron and TFP Farrels) on the interfacing area of the parkland which connects to the M+ museum, overlooking Victoria Harbour.

Announcing the appointment of the park design consultant today, Mr Michael Lynch, Chief Executive Officer, said, “Appointing this design team, each with world-class expertise in the sector, is another major leap forward in the development of the District. Working hand in hand with the design team, we are now in the exciting position to take forward one of the biggest infrastructure projects on site. I have every confidence that together we will turn the Park into one of the most inspiring and unique spaces in Asia.”

West Kowloon Cultural District
The West Kowloon Cultural District is one of the largest cultural developments worldwide. Its vision is to create a vibrant cultural quarter for the city, a vital platform for the local arts scene to interact, develop and collaborate, and major facilities to host and produce world-class exhibitions, performances and arts and cultural events. It will provide 23 hectares of public open space including ample green space, a green avenue and a harbourfront promenade, and will be closely connected with the neighbourhood.

Freespace
Freespace is one of the venues at the West Kowloon Cultural District. It aims to nurture local talents and energize the local performing arts scene. With a black box theatre and an outdoor stage, Freespace is the perfect platform for artists and audience to encounter, exchange ideas and explore the endless possibilities of performing arts without boundaries.

Profile of the Park Design Team

Lead consultant Dennis Lau & Ng Chun Man Architects and Engineers (HK) Ltd (DLN) was founded in Hong Kong in 1972 and has grown in step with the city since that time to become one of the most versatile and best known architectural and design practices in the region. DLN’s work is emblematic of contemporary Hong Kong’s vitality and culture and includes some of the best known landmarks in the city.

Park design is to be conceived and developed by West 8, supported by local project landscape architect ACLA. Their in-depth knowledge of local flora and landscape practice will complement West 8’s design. ACLA was established in Hong Kong in 1978 and has been responsible for design of many of the landscape environments in the city. Besides parks, ACLA is currently working with the Government as the landscape consultant behind Greening Master Plans covering the whole of the territory of Hong Kong.