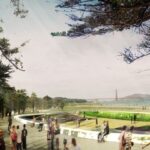 On September 4th, five internationally-renowned landscape architecture and design teams shared their concepts with the public for 13 new acres of Presidio parklands in San Francisco.

The five teams: CMG Landscape Architecture, James Corner Field Operations, OLIN, SNØHETTA, and West 8 Team, described their concepts at a public meeting at the Presidio. The presentations initiate the “Imagine Phase” of the project, which invites the public to submit their own concepts and program ideas for the new parklands, as well as provide feedback about the design teams’ concepts.

The new parklands will be created by the replacement of the elevated highway (Doyle Drive) that has cut through the Presidio for seven decades, with a below-grade roadway covered by tunnels. The Presidio Trust, in partnership with the Golden Gate National Parks Conservancy and National Park Service

The five teams were selected from 25 respondents to a RFQ in March, 2014. They were provided with a stipend and tasked with developing conceptual design and programming for the new landscape. The brief encompassed three interconnected sites:
● The design and construction of dramatic parklands atop the new Presidio Parkway
● A revitalized Crissy Field Center Youth Campus with a new “Learning Landscape”
● A reimagined Presidio Visitor Center

“These are exciting and creative concepts for a 21st century park destination full of visitor activities, scenic beauty and programmatic offerings in the Presidio,” said Greg Moore, president and CEO of the Golden Gate National Parks Conservancy.”

A winning team is to be selected in January and the New Presidio Parklands Project is expected to be completed in 2018.

TEAM WEST 8’S APPROACH FOR THE PRESIDIO
Team West 8, a collaboration between West 8 and local partners Bionic, Sitelab Urban Studio, Jensen Architects and The Cultural Landscape Foundation, proposes a clean, declarative and respectful design for the Presidio that creates a destination unlike any other.

Team West 8’s design for the New Presidi0 Parklands is anchored by the elegance of this extraordinary setting, is intended to honor the site’s legacy as a military post, and engage all communities. The design welcomes and connects, honors and educates, orients and amplifies—complementing, not competing with the inherent drama of the Presidio itself, Crissy Field, the Golden Gate Bridge, Alcatraz and the City beyond.

The New Presidi0 Parklands will feature a microcosm for the multiple experiences of the Presidio: a central ellipitical lawn and gathering space, forests to lose oneself in, gardens, marshes, boardwalks, expansive views, all composed to create an unrivaled destination for the Presidio that is recognizable and memorable, yet full of surprises.

The proposal has already received positive feedback from the press with John King from SF Gate News commenting that “The bowl-like landscape (The Elipse Lawn) that slices down toward Crissy Field is a strong move that would be a powerful invitation to move upward into the Main Post, while the self-contained oval would be compelling on its own.”

Enhanced by layers of programs and activities that engage and animate the spaces of The Gateway. The clarity of the design concept for the New Gateway site embeds a flexible approach that is not a grand solution, but a series of explorations and opportunities that can inform the still-to-be-developed collective vision for this critical capstone for the Presidio.

Within this simplicity lies an inherent complexity of places and movement that allows the park to respond to many users and uses— improving connectivity, establishing identity, building community, and restoring ecology—in a flexible frame that makes a memorable and instantly identifiable world-class destination — the New Presidi0 Parklands.