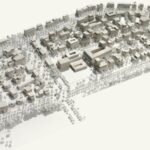 On 21 September 2011, the Department of Urban Planning and Construction announced that West 8 has won the competition of urban and landscape planning for the first phase of Freiham North.

Freiham Nord will be the last substantial development to take place in Munich and will accommodate about 10.000 inhabitants. In the Masterplan, Freiham Nord has been divided into several project areas with different programming, each about 40 ha in size. The design competition in which 24 offices participated, was organized by the city of Munich and concerned the first two development areas.

Mayor Of Munich, Christian Ude comments that the West 8 winning design “promises a pleasing vibrancy and diversity of the plots.”

Urban Planning Councillor Prof. Dr. (I) Elizabeth Merk: “Freiham offers the chance to tread a different path in a small-scale urban development and to realize a growing city in space and time structure. Open space and green structure is therefore a key element of this urban design. ‘Everyone wants a house’ – the selected competition design meets this request by a tight, yet loosened development structure, which is conveyed by a green space design.”

Winners of the competition: