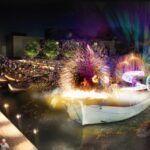 On 10 October 2012, West 8 – in association with Speirs + Major | Designers working with light – has been announced the winner of the Lighting Master Plan for the future urban development Kruunuvuorenranta in Helsinki. Our Luonnon Lyhdyt “Natural Lanterns” entry will share 1st prize with “Into the Light” of Team Bartenbach.

On the site of a former oil harbor, a new residential area with 10,000 dwellings will be constructed. The Lighting Master Plan is meant to give guidance to the development of Kruunuuorenranta by creating a functional lighting plan and by introducing an attractive nightscape seen from a distance. The area has a great potential for expressing its natural wealth. The proposed Master Plan takes benefit of this notion and strengthens the natural qualities in such a way that the neighborhood will derive its identity from that. Both the proposed landscape and illumination plan anticipate on the natural sources in terms of quality of darkness, use of local materials and site heritage. By emphasizing the natural scenery a strong sensation of being in Kruunuvuorenranta is created.

The majority of people using the site after dark on a day-to-day basis will be the people who live there. Artificial light must, first and foremost, be used to create a great place to live. The water’s surface provides a highly reflective foreground which, when fluid, will create a broken, animated reflection of the lit image of the waterfront – in effect almost doubling up the perceived quantity of light present when viewed across the water. Light will therefore be minimized and used sensitively to reveal gateways, selected heritage features and Neighborhood Lantern Pegs.

Throughout the site, the reflectance of materials will be considered to optimize the lighting strategy – allowing both passive and active lighting (i.e. both the reflectance of surfaces and the amount of light cast upon them) to work in harmony to minimize energy use and create an appropriate balance of luminous and dark surfaces.

From the Jury Report: “The plan is detail-oriented and proposes that light should be used when appropriate, but only in small amounts. The end result is a beautiful whole, with the particular strength of focusing on the resident’s point of view. (…) The details are sensitive and inventive.”

The original assignment as prescribed in the Competition Program: “Kruunuvuorenranta will be a high-grade, marine residential area for approximately 11,000 inhabitants. (…) The purpose of the competition is to create an artistically oriented lighting plan for Kruunuvuorenranta that is visually, ecologically and technically sustainable and feasible.”

Members of the Jury:

As well as the following representatives of other parties: