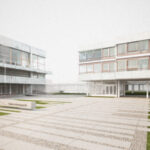 Rotterdam, 15 April 2011 – West 8 wins the design for the campus of the German Constitutional Court in Karlsruhe.

The Paul Baumgartner-designed Constitutional Court in Karlsruhe is being restored. The campus of the court complex is to be revitalized and situated adjacent to the botanical garden and is part of the Schlossgarten.
West 8’s winning competition entry features a grassland with stylized concrete tracks which make a patterned landscape in which the buildings float. The design is characterized by its modesty, and by the strategic integration of the monumental buildings with their broader context.