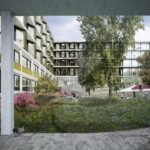 The new hospital will be constructed behind the station area of Vilvoorde, ensuring good connectivity by car as well as public transport. The hospital is intended to catalyze one of the most important and strategically located areas in Vilvoorde. Cor Wagenoor, Professor at the Technical University of Delft and expert in the architecture of health care, assisted in the process and is very happy with the selected design team: “This design team has perfectly translated the very clear vision and strategy of the hospital into architecture.”

In finding a suitable design team a so-called Open Call for Tenders was issued, a selection procedure under the guidance of the Team Vlaams Bouwmeester (Flemish Government Architect). “The choice for the combined Belgian and Dutch design team was made on the basis of the integrated vision and coherent concept on multiple spatial scale levels: the city, the location, the building and its interior. In which, a link is created between the principles of a healing environment and urban integration,” said Dr. Guy Buyens, Managing Director of the AZ Jan Portaels hospital. The selected design team is responsible for the urban design, architecture, interior, functional design and landscape of the Flemish hospital.

In the hospital 10,700 hospitalized patients will be treated and 64,500 consultations will take place on an annual basis. The hospital will feature a ‘cut open building block’ design. This creates a balance between the opening up and shutting out of the urban surroundings, and ensures the calmness and serenity of the enclosed courtyards within the hospital is not lost. The effect is a healing atmosphere that focuses attention on the patient and his/her surroundings.

The cut open building block also combines the advantages of a campus layout with the compactness of a closed building block. The individual buildings, such as the cure-care building, the health centre and the office building, are easily recognizable and arranged in such a way that they form part of the building block. In this way a very compact layout has been created with short walking distances, great interconnectivity and distinctive architecture.