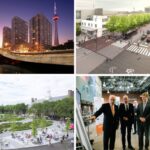 Toronto Central Waterfront has been in the midst of a remarkable revitalization. This Friday the 19th of June, Queens Quay, the backbone of the revitalization effort, will be officially opened by the Mayor of Toronto, Mr. John Torry. From 11:00am – 1:00pm a media walk will take place with design director Adriaan Geuze and West 8 project leader Jelle Therry organized by Waterfront Toronto. The revitalization of waterfront landscapes, and the work being carried out in Toronto was discussed by their Majesties King Willem-Alexander and Queen Máxima of the Netherlands on their recent visit to Toronto.

Led by Waterfront Toronto, West 8 + DTAH, the winners of the 2006 Central Waterfront Innovative Design Competition, have been designing a comprehensive vision for the area that links the major destinations along the water’s edge, creates pedestrian and cycling-friendly promenades, new public spaces, encourages economic vitality and gives the city the world-class waterfront boulevard.

Queens Quay, which runs east-west parallel to Lake Ontario, is the city’s main waterfront street. Spanning more than 3 kilometers, it features a series of iconic wave decks, two lanes of traffic on the north side of the street, a Light Rail Transit (LRT) line in the middle, generous granite pedestrian esplanade defined by a double row of trees of the south side of the Martin Goodman Trail, a multi-use recreational trail. Once uninviting, the opening of the new world-class Queens Quay, offers a grand civic meeting place and an environment conducive to economic vitality, ground floor retail activity. The design is set to create a lasting legacy for the city, which is both beautiful and functional. Earlier this year West 8 together with Toronto’s KPMB and Ken Greenberg, won the design competition to redesign the nearby Jack Layton Ferry Terminal and Harbour Square Park. In 2009, the Toronto Waterfront Master Plan received the prestigious ASLA Honor Award from the American Society of Landscape Architects.

Another prominent project is Governors Island in New York, which reopened this spring after the first planting season. With events like the 10th edition of the Jazz Age Lawn Party, the summer season 2015 Governors looks set to welcome a record number of visitors. Besides a plethora of activities and events on this urban island park, visitors can also witness the the steady rising of Phase 2 of the Project ‘The Hills‘, scheduled for completion in fall 2016.
Governors Island Park and Public Space project, has dramatically transformed this once-abandoned island from a utilitarian, windswept military base into a green icon for the city of New York. The park offers breathtaking views over the harbor, to the Statue of Liberty and Downtown Manhattan.

Over the last eight years West 8’s design vision has been developed from master plan through to a realized park. During the summer of 2014, Phase 1 of the Governors Island Park and Public Space was officially opened by Mayor Bloomberg. This spectacular new landscapes of Phase 1 was discussed three times in the New York Times and headlined the June 2015 issue of LAM magazine, the journal of the American Society of Landscape Architects.

For more information:
The official opening ceremony and invite:
Official Invite
Party on the Promenade