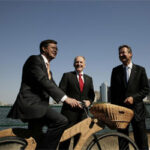 As part of the celebrations marking the 400th anniversary of Dutch-American relations, Dutch Prime Minister Balkenende, Minister Verhagen and Minister Timmermans visited Governors Island on 23 September 2008.West 8 recently was commissioned to transform Governors Island into a new park for New York. The Prime Minister did a little tour on one of the wooden bicycles West 8 designed for traversing the many future looping tracks and paths on the island. 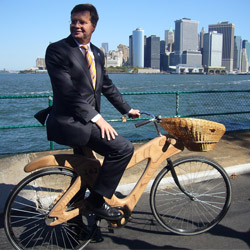