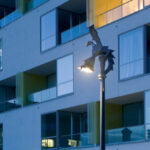 By creating new connections from the city to the waterfront, Amerika Plads is the urban tissue that finally reconnects the city with its once lost coastal edge.

West 8 was asked to transform the area of Nord Bassinet and Söndre Frihavn into a residential and office neighbourhood, integrating vital port activities such as the ferry and nearby marina into the design.  These attractive functions established a pure identity of the sites and protected the area from sterility and suburban “silence.” It also created a ‘critical mass’ for the harbour area to help become an integrated part of the city.

In the 19th century, Copenhagen lost contact with the sea because of the extensive harbour industry and the construction of railway tracks in the city. The abandoning of the harbour areas and its recent redevelopments offered both a tremendous opportunity for urban development and for reconnecting the city of Copenhagen with its waterfront.