Borneo and Sporenburg are two 19th century harbour docks located north of Amsterdam’s city center. Between 1993 and 2000, West 8 led their transformation into one residential district with 2500 mainly low-rise dwellings, in a high density of 100 units per hectare.

A vast expanse of three-story back-to-back terraced homes is interrupted by three sculptural apartment blocks – ‘meteorites in a sea of houses’. The district’s streets are relatively narrow, yet the highly varied and innovative floor plans incorporate generous amounts of light, air, and views. This was achieved by introducing 3,5m high ground floors and ‘voids’ sized up to half the volume of every house, forming patios and roof gardens in different constellations. 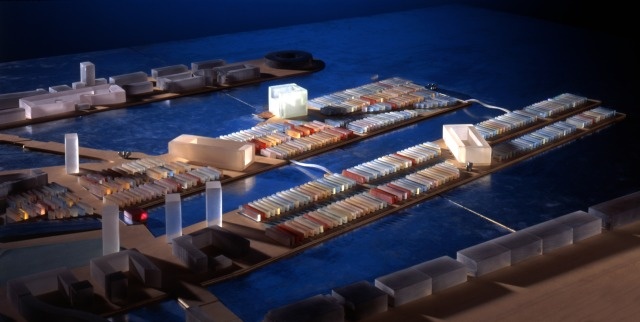 West 8 supervised 100 emerging and established architects in their designs for a re-interpretation of the traditional Dutch canal house. The playful variation in façade designs led to an animated street elevation, culminating in the row of privately commissioned houses at the Scheepstimmermanstraat. The two realised ‘meteorites’ are the industrial brick apartment block Pacman (Koen van Velzen) and The Sfinx/The Whale, with its West 8-designed courtyard, a sloping roofline and zinc panelled facade (ArchitectenCie).

Water is the dominant public domain of Borneo-Sporenburg, a quality celebrated by two landmark bridges. The scent of the wind, reflections and sunsets over the river IJ are pulled into the living environment. The wide architectural diversity asked for a ‘low-on-design’ public space. The streets are paved with Dutch brick and have large concrete kerbstones. The 19th century quay structures were simply renovated, while a diagonal green strip creates a sightline through Borneo-island.