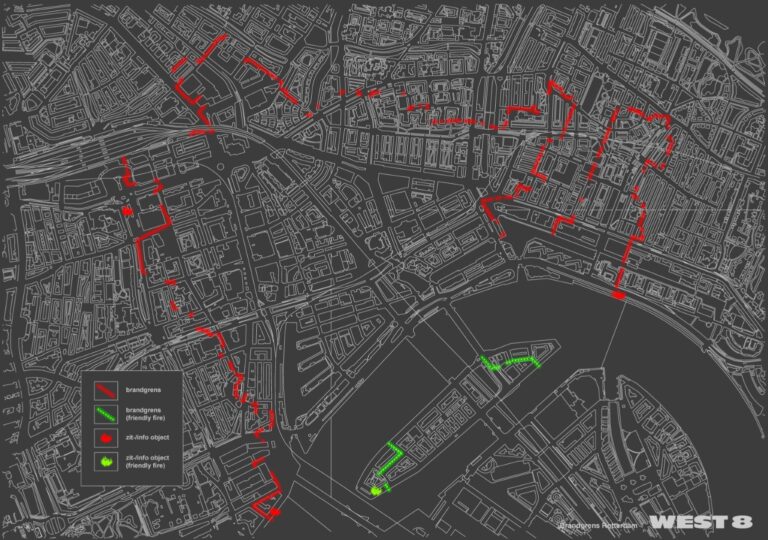 Permanently marking the areas of Rotterdam that were destroyed by the bombing on 14 May 1940 and the ensuing fires that broke out, the design of the Brandgrens uses light objects to draw a boundary line within the public space.

The bombing of Rotterdam only lasted fifteen minutes but managed to destroy practically all of the city centre, leaving a permanent mark on the urban fabric. West 8 won the design competition in 2007 organised by CBK Rotterdam to use light objects to mark the fire limits permanently in the public space. An iconic image of a flame is incorporated in the circular light objects on the ground – a visual connection with Zadkine’s statue commemorating the bombing of Rotterdam. This physical marking of the fire limits is coupled with information about the historic meaning of the bombing on several information statues and is also accessible through a website.

On the 14th of May 2010, exactly 70 years after the bombing, the permanent marking was finished with the unveiling of the ‘Brandgrenssteen’ – the War Memorial Stone, which gives detail information about the bombing. In 2020, ten years after their installation, West 8 assisted with a technical update to the Brandgrens WWII Memorial. Previously only visible at night, the new generation of LED fittings from LichtNL have allowed both the red and green lights to be visible throughout the day and become illuminated with the public lights at dusk.

The City of Rotterdam