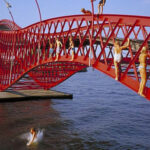 The three bridges of Borneo/Sporenburg played an essential role in the creation of the unique atmosphere of the harbour-residential area.

Two of the bridges, one on the West side and the other on the East side, span the 93-meter wide water of the Railroad basin and connect the islands of Borneo and Sporenburg. The third bridge is situated in the line of the East bridge and spans the 25-meter wide inland port.

The two harbour peninsulas Borneo and Sporenburg in Amsterdam were transformed into a neighbourhood for 6000 resident. Built between 1996 – 2000, West 8 acted as Masterplan designer and architectural supervisor for over 30 architects, ensuring diversity and uniqueness in the executed development.

18 Most Beautiful Bridges of the World - Architectural Digest, 2019