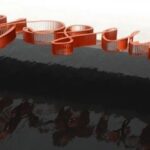 As a follow-up to the Capital of Culture year RUHR.2010, the exhibition EMSCHERKUNST is set to show exciting art projects every three years at unusual locations: fallow wastelands, former industry facilities, and the no-man’s land between the Emscher River and Rhine-Herne Canal, will be transformed into stages for national and international artists. West 8 exhibits a sculptured parapet, a new air lace, which replaces the old one on the western side of Emscher Bridge on Schlossstrasse in Dinslaken.

A number of bridge structures along the Emscher River ensure that the local infrastructure will continue to function as smoothly as possible despite the disruption caused by the flow of the river. When the construction started 40 years ago, the cost effectiveness determined the design and the same modular were used for many locations. In effect, a ‘bridge family’ was created. While the cross sections and lengths of the bridges along the Emscher River vary, all of the parts visible to foot traffic – and specifically the parapets – are all the same.
This repetitive appearance and the rational, uninspired design of the bridges blend naturally into their surroundings. The actual locations of the bridges and their repetitive spacing along the Emscher River create a rhythm, yet each of the structures is withdrawn from visual attention in terms of their structure.
This visual repetitiveness of the bridges forms the context for the parapet sculpture of West 8. The bars and banisters continue to remind the viewer of their intended function. Their linear, rigid continuance, however, is replaced by a soft, pendulous and sinuously entwined structure. The formerly purely functional bridge element is given new meaning by way of its new visual independence, creating a standalone, expressive object. The sculpture strips itself of its function, resulting in a need for additional measures to ensure safe passage across the bridge. An additional support structure ensures the static stability of the sculpture, while grating bridges the gaps created between the edge of the bridge and the parapet.

The design offers passers-by on the bridge an opportunity to practically ‘leave’ the bridge and virtually hover in mid-air over the river. 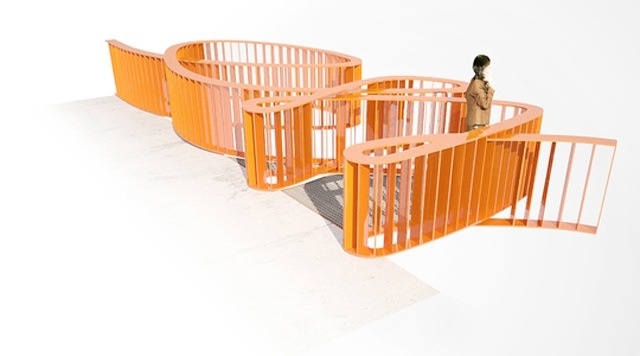 the Emschergenossenschaft, the Regionalverband Ruhr (Regional Association Ruhr) and the Urbane Arts Ruhr of Germany, Emschuerkunst 2013.