The ‘Harbour Landing’ plan defies simple categorization – a ferry terminal, an urban park for active water-based activities, a retreat and an oasis for office workers and residents. The park was designed as an urban getaway for people living along the waterfront and an introduction to the waterfront for visitors to Toronto. This design vision re-imagines Harbour Landing as an integral part of a continuous network of renewed public space, an animated and dynamic public space fit for all seasons.

The design of the new park and ferry terminal will become a central feature of Toronto, a “landing” place where the city meets the lake. ‘Harbour Landing’ works in 360 degrees, addressing both the landside and waterside and is poised to become a new icon for the city and a counterbalance to the urban life at the Toronto Waterfront. The master plan was designed to be implemented in phases over time as funding becomes available.

The initial design of Harbour Landing included an organic form of the park with rolling hillocks, gently sloping topography elevated from street level, which offered visitors dramatic harbour views and a panoramic backdrop of the Toronto Islands. With an undulating rooftops, the landscape-forward approach of the park was then echoed in the design of the Ferry Terminal – with an accessible rooftop via gently sloping ramps. The public could survey the shoreline from this ‘gained park space’, where visitors would enjoy a wider promenade with a granite mosaic and new interactive signposting system which utilized giant periscopes when approaching the island gateway.

KPMB Architects, West 8, and Greenberg Consultants won the Innovative Design Competition for the Jack Layton Ferry Terminal and Harbour Square Park in 2016. Their proposal to the partnership of Waterfront Toronto and the City of Toronto, entitled ‘Harbour Landing’ was highly appreciated by the jury for its practicality and its “iconic” design, as it fused the revamped ferry terminal and neighbouring park into one special new place. West 8 has been involved on multiple occasions in Toronto since 2006, most notably with its master plan for the Toronto Waterfront. The Harbour Square Park and the Jack Layton Ferry Terminal design is cohesive with the concept of the surrounding Toronto Waterfront and construction of Phase 1A started in late October 2017. 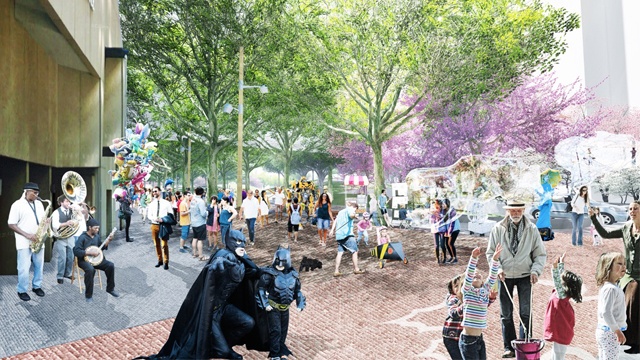