Located in the Valle del Cauca and nestled between the Andes, the city of Cali is defined by three key landmarks; the hills that frame the valley, the River whose flow is governed by the surrounding rainforest and the former rail line to the Pacific (Green Corridor).  It is within this context that the city’s eclectic urban center is anchored.

Encouraging Sustainable Urban Development; Reconstructing Urban Life
In this car dominated society, West 8 and the Municipality of Cali’s new urban design prioritizes pedestrians and cyclists. It facilitates important access to new public transport terminals, and provides safe and pleasant passageways for cyclists and pedestrians through the rapidly expanding city. In addition to providing a new infrastructural network for the many people who use the bicycle as their predominant mode of transport, this project aims to endow the city with a peaceful public environment, providing places where people of Cali can meet and enjoy on a daily basis.

Environmental Issues Treated as an Opportunity
Suffering from problems of deforestation in the upper river catchment, widespread pollution and safety issues, West 8’s design will reconnect Río Cali Park with the river landscape where the natural assets and the environmental legacy of the Cauca Valley are the treasured. Transforming it from an underutilized and overgrown urban green space into a rehabilitated ecological landscape and respected city destination. By dealing with the environmental issues, the city also gives way to a major urban transformation.

The Río Cali Park, is a result of a strategic alliance between the public and private sectors. West 8, together with the Municipality of Cali, has worked intensively on the design of the park which is intended to create a safe and well connected urban realm and catalyze the renewal of the urban center. Construction on the park began in 2015. 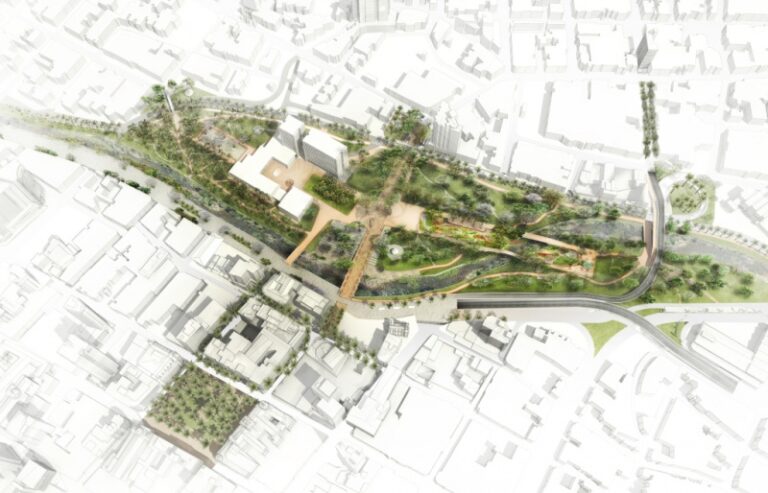