Today, Schloss Eybesfeld, a former baroque edifice which has been refurbished in multiple stages is a spacious park featuring picturesque waterscapes and a modern sculpture garden. West 8 ongoing involvement includes an on-site architectural development and the creation of a urban and landscape master plan for a 30ha business park immediately adjacent to the site, on an area of land also owned by the client.

The intention of this landscape project was to find a universal solution to two seemingly opposing idea by means of a simple, straightforward design. On the one hand, the design had to create a more intimate and natural atmosphere for both the entrance and the Eybesfeld lock, two key parts of the garden and establish a clear distinction between the garden’s private and public areas. On the other hand, the solution could not undermine the integral character of the garden, which should be seen as one cohesive landscape. As such, it was important that the existing Castle grounds form part of the General Garden Concept for Eybesfeld.

In order to safeguard the privacy of the Park, the client requested a natural and scenic way to enclose the estate. A natural landscape concept for containment was developed over a length of more than 400m, this encompasses a residential building with a green facade, a historic wall, an overgrown earth wall and two monumental gates. The enclosure is playful and varied and effectively fulfils its intended function.

At southern entrance to the castle is the Glyzinienhof (Wisteria Terrace), an experimental mixture of a living façade and modern, functional building. A steel frame is attached to the balconies and stairs of the two-story structure, which also features a flat roof and portico. Wisteria vines are then attached to frame’s steel cables at irregular intervals to form the striking green facade, which blooms with the seasons. 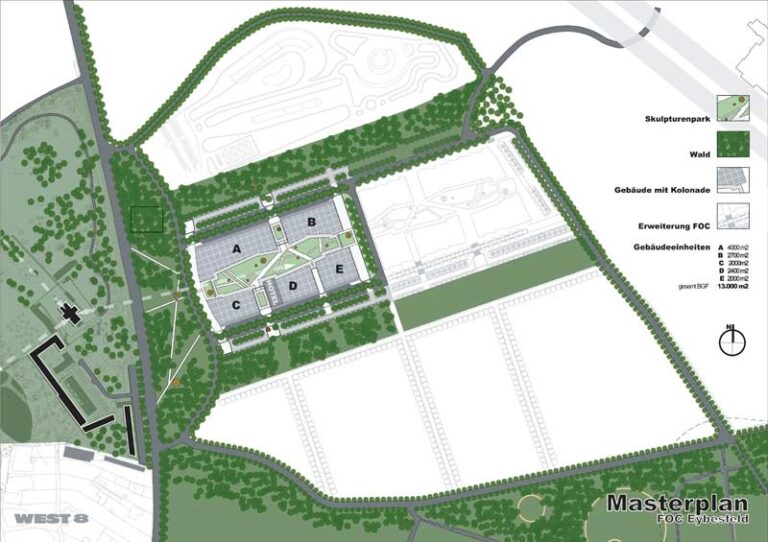