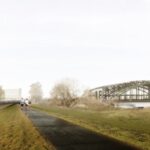 In June 2013 West 8 was announced as the winners of the design competition for Veddel North, a riverside community which lies on the south bank of the Elbe River in Hamburg, Germany.

The three-month long competition sought creative and practical design concepts to optimize the spatial qualities of flood protection systems and improve the residential and commercial areas on the north bank of Veddel.

The design emphasizes the site’s unique location on the banks of the river Elbe near the large Elbe bridges (which form an important entrance to the city of Hamburg) and builds upon the revitalization of the lost Veddeler Market to create a vision of a multi-layered mixed use environment. It uses the fragmented structure of the existing buildings to form the basic framework for a multipronged approach to urban planning.

The design also focuses on the Veddeler Dike Park, here West 8 envisions a mixture of natural park areas and landscaped lawn areas with opportunities for dramatic panoramas of the Elbe river. The park will begin at the end of the market place with a system of ramps and bridges, which connect the residential area with open spaces along the Elbe. At the end of this ramp system a viewing platform will be erected at the height of the dike.

Bridging the gap between urban district and dike ensures that the cycling and walking are physically separated from the passenger car and heavy goods vehicles. A series of bridges and pontoons allow cyclists and pedestrians to cross under the railway bridge, ensuring the free space on the Elbe becomes comfortable and safe for residential traffic. By supplementing existing vegetation a green, fertile milieu with an urban park character will be created On the city side of the dike.