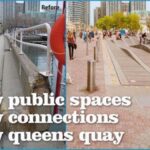 Toronto’s main waterfront street has been successfully transformed into a showpiece for the city, to mark this project milestone a festive opening is scheduled for Friday the 19th of June at 6:00 p.m.

Queens Quay, which runs east-west parallel to the Toronto lakefront, is the city’s main waterfront street. It spans more than 3 kilometres from Bathurst Street in the central waterfront to Parliament Street in East Bayfront. The revitalization of the new waterfront neighbourhood designed by West 8+DTAH and led by Waterfront Toronto will transform Queens Quay into one of the world’s most beautiful waterfront boulevards.

The plans for Queens Quay, which were developed after an international design competition and extensive environmental assessment process, include two lanes of east-west traffic on the north side of the street with a dedicate Light Rail Transit (LRT) line in the middle. All of which have been fully operational since 10th of June, 2015.

On the south side of the street, a generous granite pedestrian promenade defined by a double row of trees runs alongside the Martin Goodman Trail, a multi-use recreational trail. Businesses and condominiums on the north side of the street front onto widened sidewalks with granite sidewalks and a row of mature trees.

The new Queens Quay offers an environment conducive to economic vitality, ground floor retail activity and urban vibrancy. An iconic street for Toronto, Queen’s Quay will link the major destinations along the water’s edge, create pedestrian and cycling-friendly promenades and encourage an economically vibrant area that serves as a destination for locals and visitors alike.

To celebrate the opening of the new Queens Quay Boulevard, the city of Toronto is planning a ribbon cutting ceremony unlike any other – and they need several hundred volunteers to make it happen.

Not wanting to spoil the surprise Waterfront Toronto is only disclosing the details of the volunteer tasks to those people who have already signed up. However they have said that volunteers should be ready and willing to do things like:
• Wave a flag – a big one
• Follow a drum line
• Work together with your fellow community members

Anyone who would like to help them with this unique ribbon cutting on Friday, the 19th of June from 6:00 p.m – 7:00 p.m and be a part of the opening ceremony can register online. Waterfront Toronto will then contact you directly to inform you of your tasks. Please feel free to share this experience with friends, family and neighbours and help spread the word about the event and the open call for volunteers.

Join the conversation about the opening of the revitalized Queens Quay Boulevard using the #NewQueensQuay hashtag on Twitter. The opening ceremony also marks the start of the Redpath Waterfront Festival and everyone is encouraged to stick around to enjoy this weekend-long celebration.

An official invitation to the opening ceremony can be downloaded here.