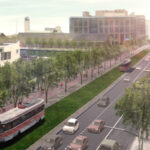 Queens Quay ready for its makeover

The plan to redesign Queens Quay, the backbone of Toronto’s waterfront revitalization plans, finally has the go-ahead.

The provincial government approved an environmental assessment yesterday for a pedestrian-friendly promenade. Construction of the first phase, an 800-metre section, should begin early next year.

The plan involves cutting the lanes of traffic from four to two, creating a wider boulevard for people to walk on, adding grass in between the streetcar tracks and extending the Martin Goodman Trail through the busiest stretch of Queens Quay.

The TTC’s light rapid transit lines will remain where they are. The three-kilometre project extends from Parliament Street to Spadina Avenue and will be completed in three stages.

An initial $48 million has been set aside by Waterfront Toronto. That will go towards reconfiguring the entire three-kilometre boulevard and building the first section, which is expected to take 18 months. The remaining phases are dependent on funding.