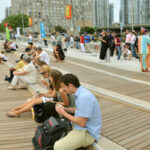 Following in the footsteps of the Spadina and Simcoe WaveDecks, the Rees WaveDeck is the third in a series of four urban docks – designed by West 8+DTAH for WaterfronToronto – to create more public space along one of the most heavily used parts of the Toronto shoreline. This 480 square-metre wavedeck is uniquely Canadian and a fantastic new addition to Toronto’s waterfront.

Built in less than 10 months, the Rees WaveDeck is an urban dock that is both a piece of art and a flexible gathering space. The form allows people to interpret the space in many different ways: the amphitheatre-like steps can be used as a passive sitting place, or as an active learning space for summer camps or the nearby sailing school.  A portion of the toe rail at the centre of the deck is removable to accommodate boarding of small boats from the wavedeck.

The two 15 metre backless benches act as an elegant barrier to the water while also providing seating for users of the space.