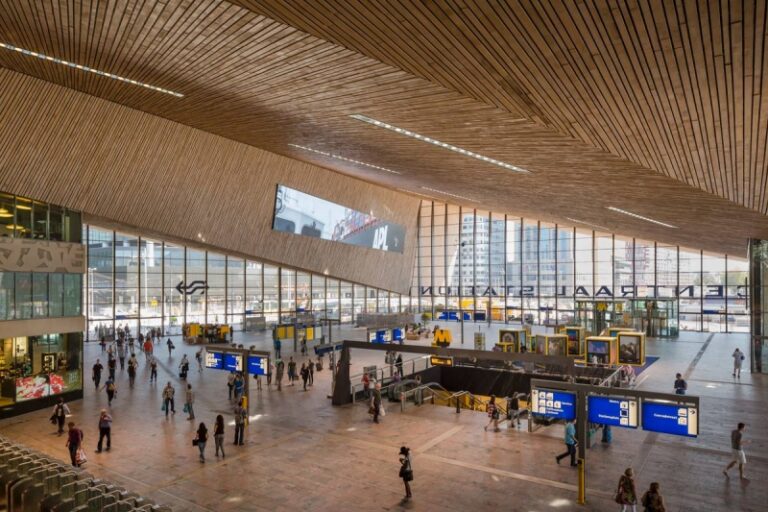 All of the eighty or so submitted projects were discussed and evaluated during an extended panel session on 16th June. Much attention was given to the relationship between the function of the project and the methods used to accentuate daylight, including the effectiveness of artificial light. Rotterdam Centraal by Team CS was selected as finalist by The Living Daylights Foundation in the category of non-residential buildings. The other nominees include Educational Training Erasmus MC, Erasmus Pavilion, The New Rijksmuseum and New gymnasium Hideaway.

Daylight Ambition of Rotterdam Centraal
Natural light, the warmth of daylight and modernity are the key elements in the station design. The roof structure is largely transparent on the Provenier side of the station, forming a continuous cover across the rail tracks over a length of 250 meters and ensuring the platforms are flooded with light. The gleam of sunshine and the heat generated by a full glass roof is tempered by a print in the glass and the different patterns of solar cells (covering 10,000 m2 of the total roof area of 28,000 m2). This creates an ever-changing, fascinating play of shadows on the platforms.

In addition to all-glass facades, seven large skylights are installed in the South Hall. Depending on the position of the sun, beams of natural light are cast inside the hall via mirrors in the roof. This offers a “Rembrandt effect”, which is inspired by the image of Grand Central in New York (1934). To mimic the evening and morning hours of daylight, custom lighting with power ranging from 150W to 250W have been installed.

In the cyclist tunnel which is located under the station, large skylights domes are installed. They are integrated into the platforms which are situated above the tunnel, providing plenty of sunlight and a feeling of safety in the tunnel.

The winner of the Daylight Award 2014 will be announced at the awards ceremony on 22nd September 2014 during the congress Light in the World Forum Congress Centre in The Hague.