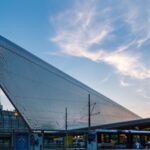 Rotterdam Centraal Grand Opening on 13 March – Save the Date

It has been almost a decade since ground was broken on this massive project and on Thursday the 13th of March 2014 the official Grand Opening celebration will be held to mark the conclusion of this extraordinary project.

A result of successful planning, cooperation, funding and execution by a number of parties including the Dutch Ministry of Infrastructure & Environment, the Municipality of Rotterdam, ProRail, the NS and the Rotterdam City Region, the new Rotterdam Centraal Station project, designed by Team CS∗, is the largest renovation and innovative rail project ever undertaken in the Netherlands in the entire history of train transport.

The completion of this project will be publicly celebrated on Thursday 13 March with live performances by renowned Rotterdam artists and performers, including Rotterdam Philharmonic Orchestra, Conny Janssen Danst, Codarts and Mothership.

Details of event to follow in fortnight or so.
∗Team CS is a co-operation between Benthem Crouwel Architects, MVSA Meyer en Van Schooten Architecten and West 88