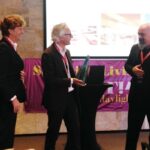 The Living Daylight Foundation awarded the new Rotterdam Centraal its fourth annual Daylight Award at the 2014 Light Congress, which took place at the World Forum in the Hague on 22nd September.

The jury for this year’s Daylight award of was led by chairman Koen van Velsen and included two former Daylight Award winners, Francesco Veenstra from Mecanoo Architects and Lars Courage, from Courage Architects.

The jury discussed and evaluated all finalists during an extensive excursion on the 16th June. Careful attention was given to the functionality of the nominated projects and the way in which natural daylight was optimized as resource. Particularly in relation to the architecture and the artificial lighting.

The new Rotterdam Centraal by Team CS, a collaboration between Benthem Crouwel Architects, MVSA Meyer, van Schooten Architects and West 8, was announced as the winner of the 2014 Daylight Award during the September 22nd Award Ceremony.

While Rotterdam Centraal is not a project everyone immediately associates with natural daylight. Daylight plays a major role throughout the complex. Daylight is infact the project’s leitmotif. Daylights presence within the station is more prominent in some place than in other. Even though it is discreet in places, its use throughout the station is unmistakable.  The jury particularly liked the sequence of spaces consisting of the three main sections of the station: the entrance hall, the transit passages and the platform roof, each with its own form of special daylight ambience.

Daylight within the design:
“The huge entrance captures daylight through its transparent facade and its tall roof overhang and likewise, daylight shines in from the two sides where the thoroughfares to the bus and tram stations are located. Overhead the large skylights are unobtrusive and even difficult to distinguish because of the subtle interplay with artificial lighting, integrated into the rectangular skylight slots.

Daylight enters the lower transfer passage, through the station platform roof, and via the huge stairwells voids. The varied solar cell patterns placed on the glass roof panels, temper and moderate the levels of light penetration, which in turn results in an ever-changing and fascinating play of shadows on the platforms,” said the jury.

Daylight as a guide for travellers:
Daylight also plays a significant role in the energy-consumption of this project: Daylight provides for daytime lighting needs and the solar cells on the roof play a significant environmental role: the solar cells achieve a 8% reduction of the station’s overall CO² emissions. Rotterdam Centraal also scores highest on the award criterion ‘Location’ and ‘Usage’.

“Travelers’ look in many directions throughout the station and can orientate themselves just fine. The daylight accompanies them in all their movements, and literally help guide them in, out and through the building. From the previously utterly cluttered and often dingy situation, the station is transformed into an impressive, clear and highly organised public building of international stature. In this intensely organised urban setting, it makes you feels safe everywhere you go whilst offering a praiseworthy entrance to the city, the region and the Netherlands.” The Jury also remarked. 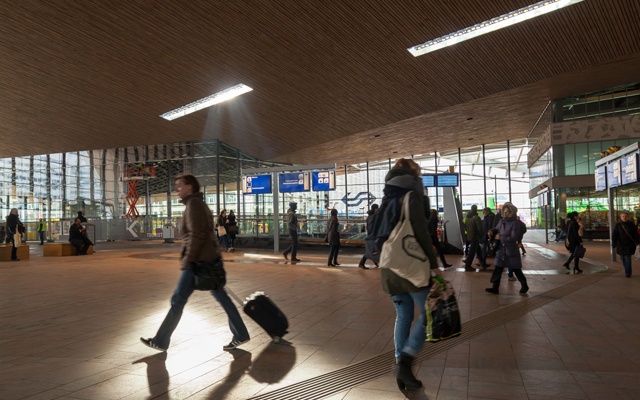 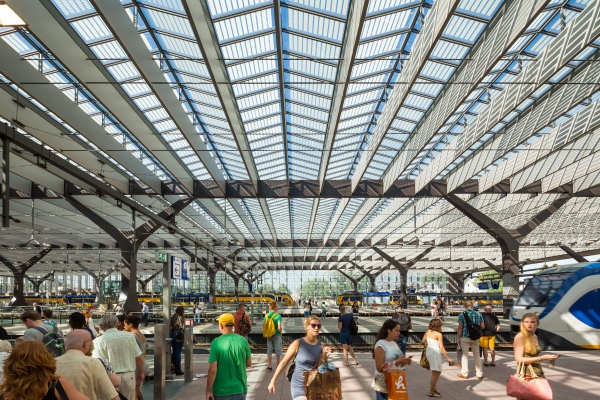