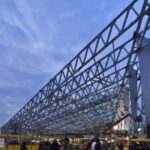 Rotterdam Centraal has been announced as the winner of the Dutch ‘Nationale Staalprijs’ (National Steel Award) in the Non-Residential Construction category. The award was presented to Team CS (a cooperation between Benthem Crouwel Architects, MVSA Meyer en Van Schooten Architecten, West 8), the project clients; City of Rotterdam, ProRail, NS and the project engineers Arcadis and Iemants at the 2014 National Staalbouwdag on the 2nd of October at Katwijk aan Zee. Rotterdam Centraal was one of three finalists selected from the 31 submissions in the Non-Residential Construction category.

The National Steel Prize, founded in 1971, celebrates the inspiring use of steel in building projects completed in the last two years. This year fifteen nominees were selected from over a 100 applicants for the 2014 award which is organized into five categories.

The station, which is frequented by 110,000 passengers a day, as many as Amsterdam’s Schiphol Airport, is made from 3500 tons of steel. The main station hall structure is made entirely from steel, although this remains out of sight behind the roof and ceiling finishes. The roof exterior is finished with a stainless steel seamed paneling.

The main roof structure was built over a period of six months and in eight phases. Individual components were transported by truck and mounted with welded joints or bolted together onsite. This process required a great inventiveness and flexibility from all parties to ensure the station continued to function throughout the entire construction process. Indeed the entire Rotterdam Centraal project is characterized by its complexity, both from the environment in which it was built and by the large number of parties involved in the construction.

The 250m long x 150m wide roof structure that stands over the tracks and 12m above the platforms is also made of a system of longitudinal, unbraced steel frames. These are situated in the middle of the six platforms and under the two long sides. The truss columns are shaped like the capital letter Y, a direct reference to the shape of the old platform roof.

The station with its high-tech construction and detailing and its many public transport options, serves as a catalyst for the urban renewal of Rotterdam. It is an integral part of the Municipality’s ambitious urban growth plan for the Rotterdam Central District and a new icon at the beginning of Rotterdam’s cultural axis.

On 7th of October, Rotterdam was also awarded the National Wood Architecture Award (De Houtprijs) in a ceremony took place on the Internationale Houtdag (International Wood Day) at Hulstkampgebouw in Rotterdam. “The new Rotterdam Centraal station has become an icon in the field of contemporary architecture and wood used in the design makes the station ‘human’ despite its immense scale. Timber is vital without being dominant.” Said Jury Chairman and BNA Director, Fred Schoorl as he handed the Wood Architecture Award 2014 to Team CS.

The Wood Architecture Award is an initiative of Centrum Hout (Dutch Wood Center). The biannual award recognizes the best applications of wood in contemporary architecture. This year 52 diverse entries were submitted for the Wood Architecture Award. The strong turnout is a good reflection of the popularity of building with wood and its versatility as a building material. The jury judged each entry on the innovative and aesthetic qualities of the architectural design and its special contribution to wooden architecture. While the scale of a project was not a decisive factor the sustainability aspect was considered essential. The life span, environmental impact, precise detailing and material selection were all taken into account by the Jury.

Of Rotterdam Centraal, the Jury has this to say:
“The station is overwhelming, unique, but also engaging and heart-warming. Wood plays an important role and is fully embraced in the design. The ceiling in the immense station hall consists of an ingenious interplay of thousands of wooden slats in different length, width and height. The design opted for a light, durable and stable type of wood (Western Red Cedar) to complement the roof. The wooden ceiling gives the hall, despite its vast dimensions, a warm and welcoming atmosphere.

In contrast to the enclosed station hall, the platforms are filled with light. Here hundreds of thinly laminated spruce beams carry an immense glass roof. These beams correspond to the steel columns on which they rest. Their modest aesthetic quality is created by their light grey colour. Their thinness, however, has a direct impact on ensuring a gradation of light shines on the platforms: creating a truly amazing ‘light show’ that continuously changes in rhythm. Much like a perpetual motion machine, with fickle clouds and sun as directors. Wood was chosen because it saves time during construction, which is essential in the building of such a busy railway junction as this central station.” 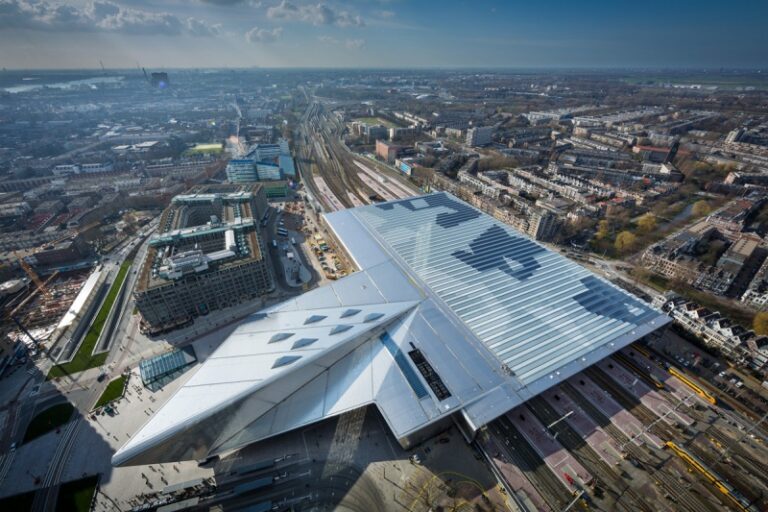 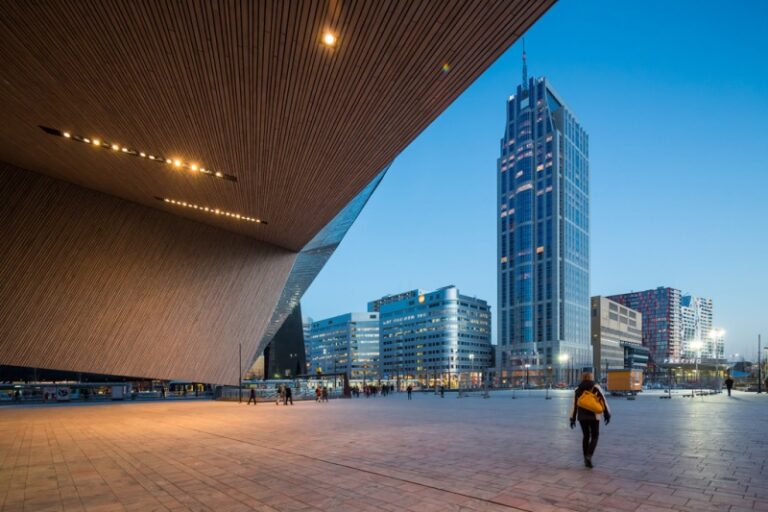 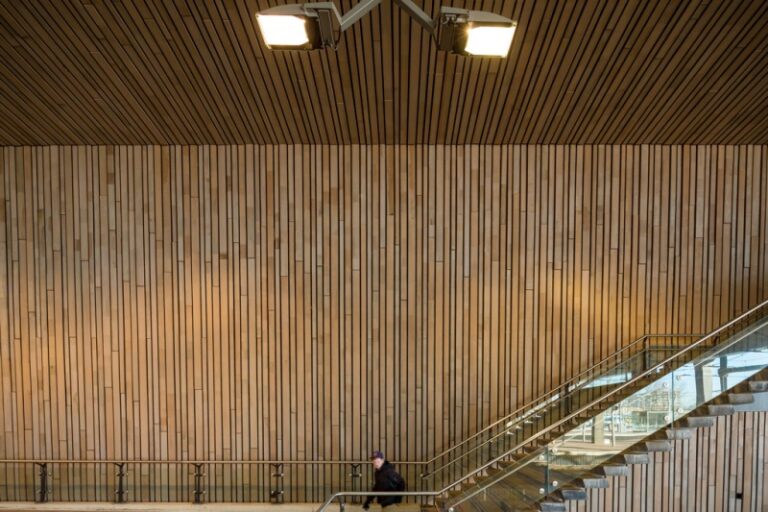 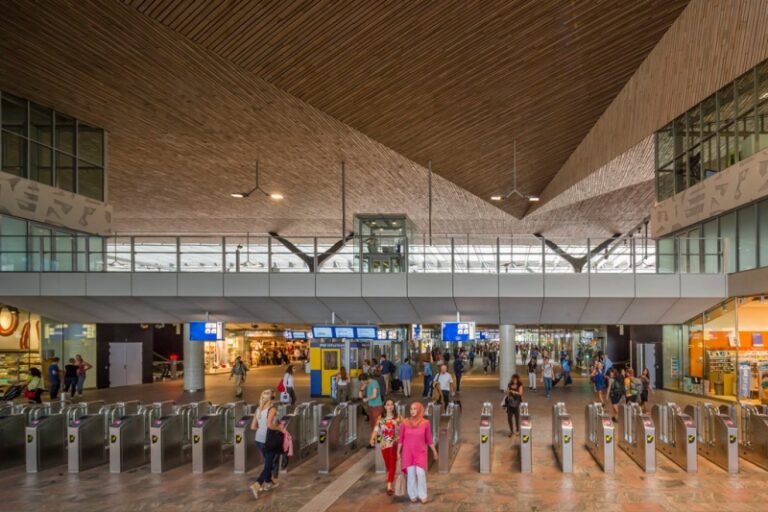 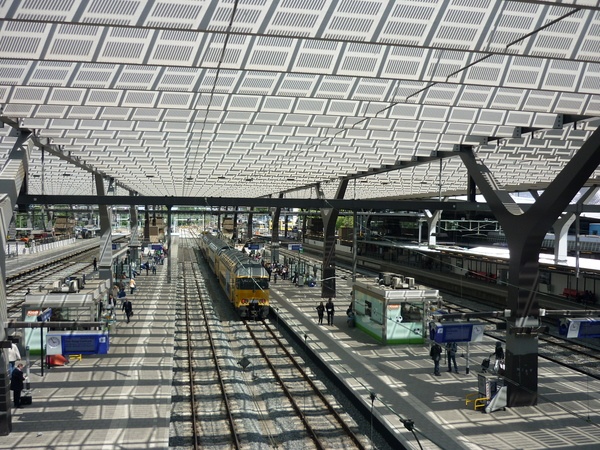