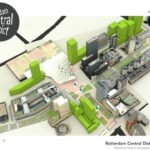 The Golden Phoenix is an annual award exclusively given to praise outstanding renovated and transformed built environments in the Netherlands. The awards are recognised for their integral nature: economical aspects, innovation and technical execution are a key part of the judging criteria but other aspects such as cultural value, sustainability, functional quality and societal influence are also taken into consideration by the expert jury.

This year, two finalists were selected from the 10 entries in the Area Transformation category. Rotterdam Central District is one of the two nominated projects, a place that “not only plays a key role for the entire city, but also caters to the needs of the several million passengers and commuters who transit through Rotterdam Centraal Station each year.” The announcement was made in late April during the youth network NRP NextGen meeting in Rotterdam, by NRP Golden Phoenix jurors Jean Baptiste Benraad and Andy van den Dice.

Today Rotterdam Central District area is a mixture of living, working, travelling and the logical location for a high quality residential area and bustling city center with a thriving 24-hour economy. The district is located in the city center of Rotterdam and the mix of living (1000+ housing units), working (15,000 new employment opportunities) and transportation make Rotterdam Central District a vibrant urban gateway,where Rotterdam and Europe meet and relax. The project positioning is described in the vision document Weena | Glocal City District (GCD).

The other nominated project, Business Park Kleefse Waard is special because of the nature of its revitalization. Project developer and family company Schipper Bosch acquired the 43 hectare terrain in 2003 and established the goal to create a perfect business climate and an innovative economic environment for clean-tech and production companies. With the help of multiple advisors, a business environment was created which promotes the preservation, refurbishment and maintenance of buildings of historical value. A place with a strong economical balance, synergy and culture of knowledge sharing between companies. West 8 is glad to have contributed to the masterplan which strikes an optimal balance between established companies and innovative start ups. Upgrading the landscape within the business park is one priorities of the master plan as well, furthering the attractiveness of the business climate.

The award ceremony will take place at 10:30am on Wednesday, 4th June at the PROVADA. The winners of each award in the four different categories will be officially announced during event and will be featured in an accompanying publication.