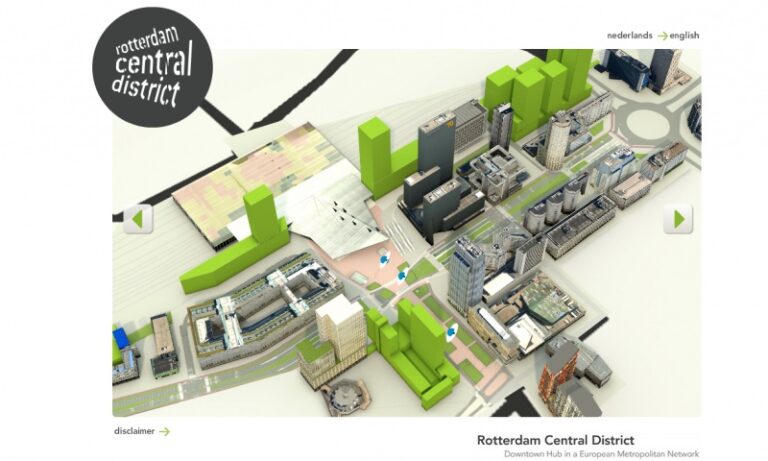 On Wednesday 23rd April, the nominations for the 2014 StiB (Steden in Beweging = Cities in Motion) award were officially announced by WPM Groep and Vastgoedmarkt. Rotterdam Central District is one of four projects nominated for this award, which is dedicated to the most successful, recently completed examples of area regeneration within the Netherlands. Award organisers, WPM Groep and Vastgoedmarkt (real estate agents) sought out inspiring developments that connect people in a smart and creative way to their city, and offer ‘added value’ to the context. The goal of the award is to catalyse the vitality of Dutch cities, by stimulating discussion, knowledge sharing and research into the qualities which fufill the demands and satisfythe desires of contemporary urban dwellers.

The new Rotterdam Central Station, designed by Team CS (a cooperation between Benthem Crouwel Architekten, MVSA Meyer en Van Schooten Architecten and West 8) serves as catalyst for the surrounding urban landscape. The placement of the station towards the Weena (one of Rotterdam’s main traffic arteries) decreases the distance to the city center. The new station is also better oriented to the adjacent Delftseplein and Conradstraat. The chances for future development increase drastically with this improvement: the whole railway zone becomes one with the city. The finer urban texture with new view lines and a mixture of living and working spaces will further quality of the residential and commercial environments in the station area. More information on the project can be found in the vision document Weena | Glocal City District (GCD).

The StiB award is issued by WPM Groep and Vastgoedmarkt, a large real estate company and a medium for real estate news. The award ceremony will take place at 14:00pm on Wednesday, 4th June at the PROVADA in Amsterdam RAI.