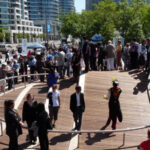 Waterfront Toronto, together with the Government of Canada, Province of Ontario and City of Toronto, officially opened the Simcoe WaveDeck, the second and most dramatic urban dock, designed by West 8+DTAH, being built along Toronto’s central waterfront.

The Simcoe WaveDeck, one of four uniquely Canadian wavedecks planned for the area, is as artistic as it is functional. Located just west of Simcoe Street at the water’s edge, the wooden wavedeck features an informal public amphitheatre-style space with impressive curves that soar as high as 2.6 metres above the lake.

Built in less than eight months, the Simcoe WaveDeck joins the Spadina WaveDeck which opened last year in creating more public space along one of the most heavily used parts of the Toronto shoreline. Construction of the third wavedeck at Rees Street is well underway and will open in August.

The wavedecks are just one part of Waterfront Toronto’s award-winning design for the central waterfront. The plan designed by West 8+DTAH also includes a continuous water’s edge promenade and boardwalk; a series of pedestrian footbridges connecting major attractions on the waterfront, and the transformation of Queens Quay into a pedestrian-friendly, grand boulevard.

For a tour of the Central Waterfront with Adriaan Geuze, Principal at West 8 and Waterfront Toronto Vice-President of Planning and Design, Chris Glaisek, log on to http://www.youtube.com/watch?v=9Hr-ujDmrMk