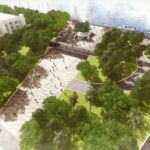 After participating in the international solicitation of the Shanghai Pudong East Coast Conceptual Masterplan in mid 2016, West 8 in cooperation with Tongji University was commissioned by the Shanghai Municipal Government and Shanghai Shenjiang Liang’an Development Construction Investment Group to design the 1.6km Xinhua Waterfront Park at the east coast of Huangpu River, Shanghai. Shanghai Municipal Government’s aspiration “to create a waterfront with vitality; to promote public health and to enrich citizen’s welfare” are key considerations for the design. West 8’s design is a world-class waterfront park that harmonizes vegetation, atmosphere, culture and art against the metropolitan backdrop of Shanghai City.

Xinhua Waterfront Park is a subproject of Huangpu Waterfront Revitalization Masterplan begun by the Shanghai Municipal Government. It is also a key development of the Shanghai Shenjiang Liang’an Development Construction Investment Group. Under one of the five riverside themes of the masterplan, Xinhua Waterfront Park is situated in the cultural corridor section with the total area of ​​17 ha. It is east of historic Minsheng Port at the Huangpu River and west of the waterfront shipyard, connecting important city streets like Minsheng Road, Taolin Road, Yuanshen Road and Fushan Road. It is one of the key projects of Pujiang Cultural Highlands, anticipated to maximize the cultural and leisure experience for users.

West 8’s design for Xinhua Waterfront Park will turn the east coast of Huangpu River to a integrated waterfront corridor with new city squares and waterfront public green space, complete with cycling tracks connecting to the city center. This project has been announced by the Shanghai Municipal Government as one of the key projects of the Waterfront Green Space Infrastructure Framework, and was included in the recent ‘13th Five-Year Plan’ issued by the Chinese National Development and Reform Commission as a pioneer project.

West 8’s approach is ‘simple yet beautiful, relaxed and romantic’ and introduces four new major city squares: Minsheng Cultural Square in the ferry terminal area; Harbour Square at the entrance of a yacht harbor with historic industrial architecture; Baizi Square (Hundred-Sons Square) with a alcove-form seating element intergrated with a retaining wall; and the Xinhua Square which connects Pudong’s most important business area Dongfang Road, functioning as a key node.

The design has entered final stage. Construction will officially break ground at the end of March 2017. The project is a significant contribution to a new Shanghai waterfront of the Huangpu River with healthy and sustainable environment for all citizens. 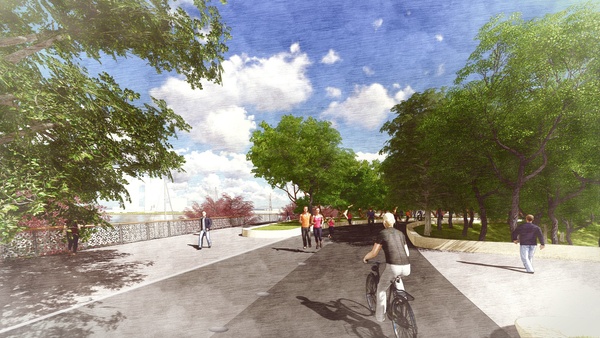