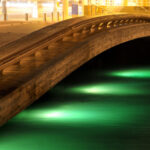 The City of Toronto’s Urban Design Awards recognize and acknowledge the significant contribution that architects, landscape architects, urban designers, artists, design students, and city builders make to the look and livability of Toronto. The Small Open Space category recognizes spaces that provide an extension and addition to the public realm in an exemplary way.

Designed by West 8 and duToit Allsopp Hillier, the Spadina WaveDeck opened in September 2008 and was the first wavedeck built along Toronto’s waterfront. Inspired in part by the Canadian cottage experience and the shorelines of Ontario’s great lakes, the Spadina WaveDeck was designed to give urban dwellers a feel for life at the lake.

“This project expressed a clear and powerful idea that seems effortless in doing something very big – extending the public’s imagination of what Toronto’ waterfront can become in future,” said the Toronto Urban Design Awards jury in it comments.

Over the summer, the Spadina WaveDeck was joined by two new wavedecks at the Simcoe and Rees slips. Together, the three wavedecks create more than 1700 square metres of new public space along one of the most heavily used parts of the Toronto shoreline. Planning is currently underway for the fourth wavedeck at the Parliament Slip in East Bayfront.