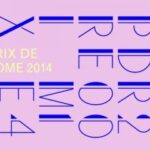 The jury list of the Prix de Rome Architecture in 2014 has been announced: Adriaan Geuze (winner of the Prix de Rome in 1990, landscape architect and partner West 8), together with William Lim (Director CL3 Architects Ltd, architect and artist), Ellen van Loon (OMA architect and partner), Saskia van Stein (artistic director and curator Bureau Europe) and Cathelijne Nuijsink (critic, writer for architecture and design) will select the shortlist candidates of 2014 and eventually select a winner in autumn. Chairlady of the jury is Birgit Donker, director of the Mondriaan Fund.

In the 2nd half of March the jury will select a shortlist of four architects from the list of candidates. The four selected architects will be given a production budget and an outline from the jury from which they must manifest into an architectural statement. Their results will be presented in autumn 2014 at The New Institute (formerly known as NAi). A second round of judging follows and the winner of the Prix de Rome architecture will be announced. The winner will receive €40,000 and a work period at the American Academy in Rome.

The Prix de Rome is the oldest and most important prize in the Netherlands for visual artists and architects under the age of 40. The history of the prize goes back to 1808 when Louis Napoleon, introduced Prix de Rome to the Netherlands to encourage the arts. Although the prize been revised over the centuries, the goal is still to trace talented visual artists and architects, and to encourage them to further develop and increase their visibility.