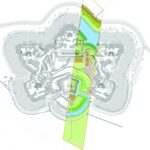 The Revitalization of Fort Vechten on Track for Completion in 2015

West 8 and Rapp+Rapp Architects have been commissioned by the Province of Utrecht since 2006 to help guide the process of conservation, restoration and rejuvenation of this magnificent part of the Dutch landscape, which was nominated for a UNESCO World Heritage listing in 1995, and declared Dutch National Monument in 2005.

Besides the restoration of buildings and museum construction works, part of the 17ha earthen bastion will be restored to its original state.  To help with the interpretive storytelling, West 8 has introduced an 80m wide band across the site which will bring the overgrown Fort back to its original barren state. The sheer size of the fortress has also been brought to the fore by a 1.5m wide ‘at grade’, entrance pathway which dissects the 7m high defense mounds.

With construction works on track the Nationaal Waterlinie Museum is scheduled to open in March 2015.