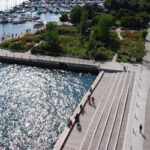 The opening of Spadina WaveDeck marks an important step towards the realization of the Toronto Central Waterfront strategic masterplan prepared by West 8 + DTAH for WATERFRONToronto.
Spadina WaveDeck is the first in a series of five variations of curving timber decks – simple articulations of the change in level between Queens Quay Boulevard and the water. A much needed public space gateway is created where the city kisses the lake, inspired by the sinuous contours of the shoreline of the Canadian lakefront.

"This unique and beautiful structure, a cross between bridge and boardwalk, has transformed the Toronto waterfront stroll (…). Despite its size, Wavedeck might be just the thing to whet civic appetites. With its undulating boardwalk, wooden surfaces, stainless-steel railings and sheer unexpected beauty, it can’t help but make one hunger for more. The implications of the new slip head are revolutionary. What it suggests is that the city exists – among other reasons – for our delight."  – Christopher Hume, architecture critic, Toronto Star

"The magic has to do with what’s visible and invisible. There’s a sense of craft with the wood on display at the WaveDeck rarely seen in Toronto (…). The sexiest bench in the city graces the length of the deck, composed of a series of narrow wooden strips, with edges curled alluringly around its legs (…). With this piece, West 8 has set a new standard for public amenity in a city hardened to the pleasures of sitting, walking and thinking about nothing at all."  -Lisa Rochon, architecture critic, The Globe and Mail