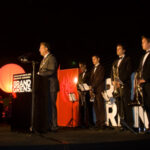 The first section of the permanent marking of the Rotterdam Brandgrens (fire limits), designed by West 8 for the City of Rotterdam,  was officially unveiled by Mayor Aboutaleb on May 14th. Together with survivors of the Rotterdam bombing and collaborators on the project, Aboutaleb lit the first eighteen light objects of the four hundred in total designed by West 8 to permanently mark the areas destroyed by German bombs.

The Brandgrens marks the areas of the city that were destroyed by the aerial bombardment of 14 May 1940 and the ensuing fires that broke out. In 2006 the city of Rotterdam decided to permanently mark the Brandgrens in the streetscape. West 8 (together with Opera Graphic Design) designed a 11,5 kilometer long track of circular light objects set in the ground.  An iconic image is incorporated in these light objects, lit by red and green LED-light. The image combines the burning city, the silhouette of a Heinkel bomber, and the contours of the desperate arms and head of Zadkine’s statue commemorating the bombing of Rotterdam. The icon literally shows the terror, the suffering, and the burning city with the German bomber overhead. This physical marking of the Brandgrens includes several information stations also designed by West 8 and is linked to a website that contains information about the bombing of Rotterdam, including photo’s and eye-witness reports.

This year the remaining light objects will be installed along the Brandgrens, creating a complete four hundred light display to permanently memorialize the bombing of Rotterdam and provide a legible impression of the extent of the 2,6 square kilometer area leveled by the bombs.