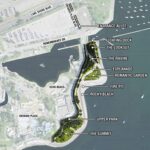 On March 19 the Provincial Government, Waterfront Toronto and designers LANDinc and West 8 revealed updated design plans for a new urban park and waterfront trail at Ontario Place at the project’s third public consultation.

The park and trail will mark the first step in Ontario Place’s revitalization with 7.5 waterfront acres of the 96-acre land parcel being transformed into green redevelopment. In response to public feedback from the previously released conceptual design, LANDinc and West 8 have refined the design to reinforce the inspiration provided by the province’s natural landscapes, bringing the project one step closer to seeing shovels in the ground.

Plans reveal a park split into two distinct zones; an upper wooded park as well as a lower park hugging the water line. 980 meters (or about 3,200 feet) of trails will be built on this 7.5 acre stretch occupying the easternmost edge of Ontario Place’s East island.

In addition to the constantly evolving landscape design, a cohesive planting, lighting and furnishing plan has also been developed as part of the park’s design. A mix of deciduous and coniferous native tree species will be evocative of Ontario’s varying wooded landscapes.

Furnishing and lighting features will take a minimalist approach, with muted tones to keep the spotlight on the park itself. Due to the site’s proximity to migratory bird routes, the lighting plan has been carefully designed so as not to interfere with birds or their migration patterns.

The design and consultation phase of the project will conclude this summer with the presentation of the final design. Until then, the Provincial Government and Waterfront Toronto continue to seek public input, via an online survey.

In an ambitious move, the project is being fast-tracked for completion in Summer of 2015, just in time for the widely anticipated Pan and Para Pan American Games. Once completed, the revitalized area will offer unrestricted access to a part of the waterfront closed off to the public for over four decades. A former staff parking lot for the now closed theme park, the new urban park and waterfront trail will also link to the 780 kilometre waterfront trail system which stretches from Niagara-on-the-Lake to Quebec.

For more information on the project visit: Ontario Place Revitalization