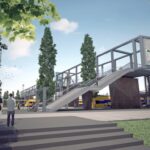 Van Hattum & Blankevoort has received the commission to realize the new footbridge across the railways at Roosendaal. West 8 has been responsible for the architectural design of the bridge while Van Hattum & Blankevoort’s daughter company Volker Staal en Funderingen (Volker Steel and Foundations) will be responsible for the design and realization of the bridge, which needs to be finished at the beginning of 2014.

Much emphasis was placed on the architectural design of the bridge. West 8 designed a footbridge which pays homage to the historical station area. The bridge will get a blue grey colour. From up front this creates the perception of technical neutrality, whilst it’s identical to the colour of the existing historical platform roofs. In gloomy weather the bridge will seem to dissolve into the sky, seen from a distance. The construction of the bridge rests on four concrete pillars which will be covered with brick masonry. This material is less vulnerable for graffiti and is consistent with the ‘brick architecture’ found in the area. The facade’s brickwork is rotated slightly with respect to the concrete pillars. This adds sculpturality to the whole design.

On purpose the design has been kept simple and the use of glass facilitates maximal transparency. Only on the ends of the bridge there is a part reserved for artwork. The choice of artwork still needs to be made in close collaboration with neighbouring residents.

With the construction of the bridge, the city centre will be connected with the Railway Port area. As part of the revitalization programme ‘Railway Port’, this new connection is crucial for the revival of this part of town. Total construction costs are estimated at 3.15 Million Euros, which the Province of Noord-Brabant, central government, the Municipality of Roosendaal and ProRail will share the cost. 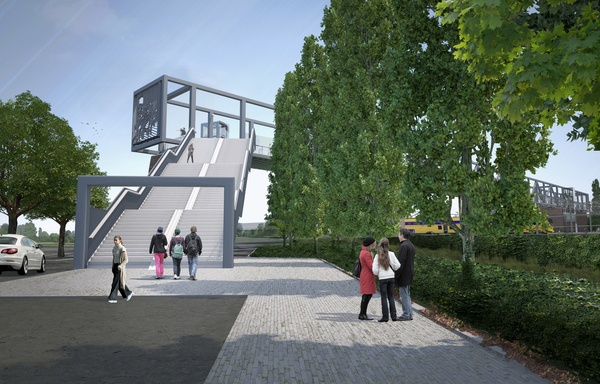