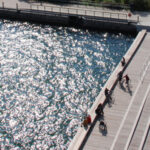 Waterfront Toronto’s wavedecks have been awarded the 2009 Jury’s Choice Award at the 9th Annual Wood Works Awards. This marks the fifth time one or more of the wavedecks have received a design or construction award in less than a year.

Wood Works, an annual awards program sponsored by the Canadian Wood Council, recognizes people and organizations advancing the use of wood in non-residential construction. The awards received more than 70 submissions this year.

Designed by West 8 and duToit Allsopp Hillier, the Spadina WaveDeck opened in September 2008 and was the first wavedeck built along Toronto’s waterfront. The Simcoe and Rees WaveDecks opened this summer. Inspired in part by the Canadian cottage experience and the shorelines of Ontario’s great lakes, the wavedecks were designed to create more public space at the water’s edge.