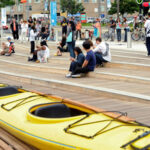 On November 23, the Simcoe and Rees WaveDecks were honoured at the 2010 Design Exchange Awards. The wavedecks, which have become much loved Toronto attractions since opening in summer of 2009, were Bronze level recipients in the landscape architecture category.

As part of its evaluation process, the jury judged each project by its aesthetics and its results, balancing function and economic success. “Small and limited in footprint, (the wavedecks) engage and energize the public in a wonderful way,” said the jury in its comments, adding that “this project has become a model or project type that has influenced other projects.”

The Spadina, Simcoe and Rees WaveDecks have garnered critical attention from the local, national and international design community. To date, the wavedecks have received nine awards or nominations including a 2010 National Urban Design Award from the Royal Architectural Institute of Canada.