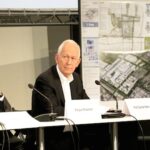 West 8 urban design & landscape architecture with Atelier Kempe Thill has been awarded third place in the FIZ Future Design Competition. First place went to HENN (Germany, Munich) and second to andernst niklaus fausch Architekten (Switzerland, Zurich). The three winners receive a prize money of 10,000 to 30,000 Euros respectively. The winning designs will be presented to the local council. Subsequently, all designs will be presented to citizens of Munich in a large public exhibition.

Teams were tasked with developing a design for the 26 hectare competition site.  According to BMW “The Group’s continuous growth, technological changes (such as the emergence of e-mobility, novel materials, and increasing interconnection) along with new working times and workplace paradigms necessitated medium to long-term restructuring and expansion”.

In agreement with the Bavarian Chamber of Architects and the Bavarian Chamber of Civil Engineers, the competition was structured as an invited competition consisting of two consecutive stages presided over by the same jury. The jury was composed of representatives of the BMW Group, officials from the City of Munich and a selection of independent architects, landscape architects and traffic planners.