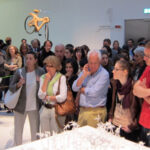 On May 20, the West 8 installation ‘Il Paradiso Nascosto’ (The Stolen Paradise) for the MAXXI Museum’s exhibition series Nature was opened to the public. The exhibition features an installation of transparent biopolymer tree silhouettes, whose light diffusion, subtle shadows, layered stratification and delicate movement creates a fantastical atmosphere. It is a light, sensuous installation whose counterpart, in the form of 21 cor-ten steel tree stump silhouettes, is found in the museum courtyard. The installation is accompanied by seven of West 8’s projects which share the same spirit of poetic narrative as a dialogue between the artificial and the natural: Leidsche Rijn park, the Eastern Scheldt Storm Surge Barrier, the Bridges in Borneo-Sporenburg, the Botanic Bridge in Gwangju, as well as the more recent  Governors Island Park in New York, Miami Beach SoundScape / Lincoln Park, and the Madrid RIO urban plan.

The exhibition is the second event in the NATURE series which is a sequence of installations by four architectural studios curated with the intent to establish a dialogue between figures in Italian and international contemporary architecture and the museum itself.