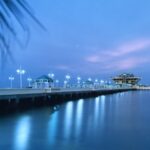 West 8 is one of the three finalists vying to design new St. Petersburg Pier, Florida

West 8, after knocking out 20 other competitors around the world, become one of the three finalists vying to design a replacement for the new St. Petersburg Pier, which has been the centerpiece of the city since it’s opening in 1973. The selection panel on Friday 19th Aug announced this news.

Only three firms are in the running now. The other two competitors are Bjarke Ingels Group, or BIG, a Danish firm and Los Angele-based firm Michael Maltzan Architecture. The city council is scheduled to hear a presentation on the three firms at a meeting Sept. 8.

When the city council approves the finalists on 8th Sep, the three will submit design concepts for a new pier by Nov. 29, with presentations in December. Then the panel that chose the three will make a final recommendation to the city council, which will then vote on Feb. 2. Roughly $50 million has been designated for the structure that will replace The Pier.