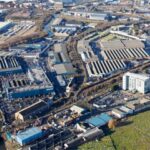 West 8 has been selected as the prime landscape architect for this project, which aims to transform 19 hectares of underutilized development into a new world class neighbourhood. Located in Old Oak Common in Western London, the area is poised to become one of the most strategically important sites for London.

In December 2014, London & Regional Properties were appointed as the sole development partner for Old Oak Park at Old Oak Common, with a mandate to see a scheme through to construction and delivery.

Lee Polisano, Founding Partner of PLP Architecture, and leader of the Masterplan team, said: “We are very pleased to be involved in shaping this significant new piece of London. The site represents an opportunity to create much needed new homes, jobs and fantastic public spaces benefiting from new rail connections and access to the Grand Union Canal.”

The full Cargiant Old Oak Park team is as follows:

Sir Edward Lister, Deputy Mayor for Planning for the Greater London Authority said, “Old Oak Common represents an unprecedented chance to create a truly new piece of London. Cargiant is set to play an enormously important role in the regeneration of the area and we are already working with their development partner London & Regional as they help to deliver the Mayor’s vision for much needed new homes and jobs. Following the Government’s approval of our plans to set up a new Development Corporation, there is now real momentum as we look to maximise this once-in-a-generation opportunity.”

Tony Mendes, Managing Director of Cargiant, said: “I’m delighted we have appointed our full masterplanning team and to have such expert partners working with us….. We want this to be a part of London we would all be proud to live in and visit. There is already great momentum behind the project and we look forward to talking to local communities in the coming months, so that those who already live and work around Old Oak Common directly help to shape its future.”

The next phase of consultation with the local community will begin in the Spring 2015.