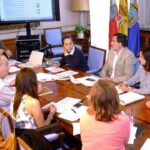 West 8 One of Five Finalists Selected to Present Proposals for the Santander Waterfront, Spain

The competition will build on the work already carried out by the City of Santander and the Port Authority who are currently engaged in a process of urban renewal and establishing better port-city integration.

Proponents will address how previously degraded areas such as Varadero and San Martin can be transformed into landmarks for the enjoyment of the public.

The selection was announced by the Councilor for Infrastructure, Planning and Housing, Mr. Cesar Diaz, after a meeting with the Contracting Committee, which included representatives of the City of Santander, the Ministry of Public Works, Ports, Government of Cantabria and Port Authority and the Official College of Architects and Civil Engineers of Cantabria.

Mr. Diaz commented that “the international interest in the revitalization of the Santander waterfront, was demonstrated by the high caliber of the 26 teams that submitted initial request for proposals and the fact that this space has been chosen as one of the examples in the XV Architecture Biennale, currently being held in Venice. The five shortlisted teams were selected for their local and international experience.”

The ideas competition is expected to commence in the coming months and will culminate in a public exhibition and popular vote. The final proposals will form the basis for the subsequent drafting of a Special Plan for the future management and development of the area.