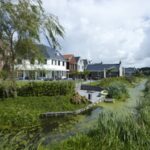 West 8 to present Cronenburgh during the annual Architectural Debate, The Netherlands

The 27th of September, the annual architectural debate will take place at Rijssen, the Netherlands. During the debate, 3 cases will be further explored, amongst which Cronenburgh. After the presentation of the cases, guests have the opportunity to join the debate on how to aim for quality in present days of hit-and-run.

Loenen a/d Vecht, or Cronenburgh, will be presented by Edzo Bindels as a case study on how the Masterplan follows the collective memory of its citizens.

Loenen is an idyllic, historical township along the River Vecht, and West 8 developed the Masterplan for its latest expansion, Cronenburgh. Unlike typical development of the era, which relied on repetitive typologies, Cronenburgh’s design is inspired by the DNA of the traditional village combined with site sensitive cues, taking into consideration view corridors towards the church, prominence of traditional pavilions and the public space design in its surrounding landscape context. The diversity of typical ‘Dutch Houses’ further contributed to the discourse of Cronenburgh.

The debate is organized by Architectuurdebat and Het Oversticht. Het Oversticht is an organization focused on spatial quality and heritage. Their aim is to stimulate a sustainable and functional environment with positive experience values.