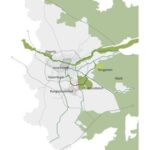 On the 31st of July, a Jury Panel announced West 8 as the winner of the competition for the revitalization of the Lightenreuth area in Nuremberg, Germany. The jury consisted of the Mayor of Nuremberg, Dr. Ulrich Maly, representatives of the Municipal Council of Nuremberg, members of the public, as well as architects, urban planners, landscape architects and representatives of the landowner, Aurelis Real Estate GmbH & Co. KG. In light of this success, West 8 will now continue to develop the urban design and landscape plan for the Brunecker Strasse (Brunecker road) area.

Phase One of the urban design and landscape conceptual planning competition for Brunecker Strasse (Brunecker road) – formerly known as Südbahnhof (South Station) began in April this year. Of the twelve international entries, three second equal places were awarded to: ASTOC (Munich), Schellenberg + Bäumler Architekten (Nuremberg) and West 8. From May to June an interactive public exhibition of the selected proposals took place. After the exhibition all three teams were able to revise their designs based on the feedback given by the citizens of Nuremberg during the exhibition.

“The revision of the designs for Stage 2 resulted in a significant improvement in the quality of the urban and landscape planning concepts in all of the designs.” Commented Dr. Ulrich Maly, Mayor of Nuremberg “issues raised in Stage One of the competition such as the location of the public parks, noise protection and the phasing of development, were further analyzed and sound solutions proposed in the second stage submission.” The final decision to select West 8’s design as the winner was unanimous.

In recent years this 90 hectare site, which was the former the freight and transportation logistics HQ for Deutsche Bahn, has only been used occasionally for commercial activities. However due to its privileged location in the area between the city centre and the recreation area”Dutzendteich”, the new owners Aurelis Real Estate working in close collaboration with the city of Nuremberg intend to redevelop this former marshalling yard into a new urban mixed-use district. Complete with residential, civic and commercial uses as well as a variety of public open spaces. West 8’s winning planning concept was considered to fulfill the goals of this ambitious development project and successfully tackled the environmental and sustainability issues associated with the site.

The Chairman of the Advisory Board, Prof. Dr. Franz Pesch draws particular attention to “the successful landscape planning” by West 8. “West 8 creates a functioning green connection from Hasenbuck to Dutzendteich, a public park for both residential and the commercial uses. In addition, another significant green space is provided in the south in the form of a semi-natural park.” This urban and landscape planning concept by West 8 will be incorporated into the development planning of the city of Nuremberg. 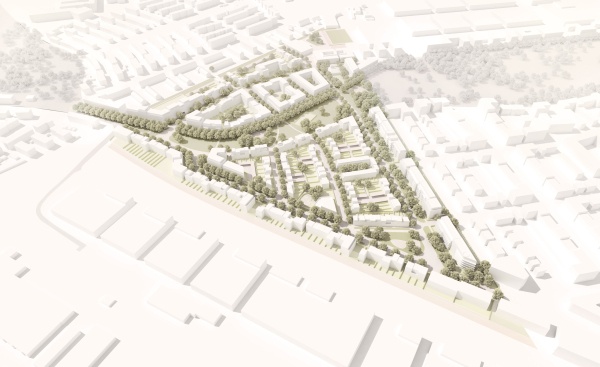 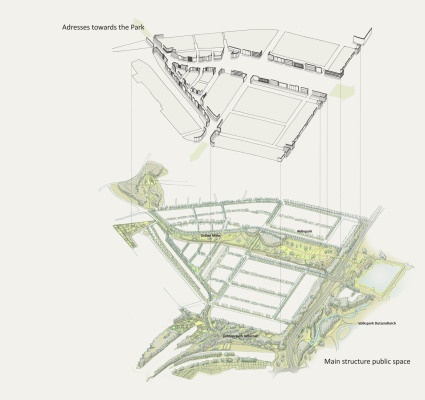