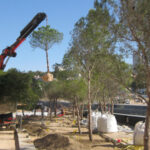 West 8+MRIO recently started with the planting of 8,000 pine trees for the Salon the Pinos in Madrid, Spain. As part of the master plan West 8+MRIO designed for the reclaimed riverbanks and the new urban area above the M30 motorway, the Salon de Pinos will act as a spiral cord, connecting the various park areas included in the design.

The species of pine trees, which is selected to be planted on this 6 km urban boulevard with a 150.000 m2 pedestrian zone next to the river Manzanares, is able to survive on the bare rock of the mountains of central Spain. A choreographie for the planting, consisting of various interventions as pruning, selection of asymmetrically grown trees, planting in groups, will allow the trees to obtain a natural and sculptural character to finally let the entire space become a botanical monument.

This very complex project has been prepared in different stages of the design. A number of tests have been executed to prepare the planting. The soil composition and technical section have been developed together with local engineers. A tree support has been designed to function as a support as well as a sculptural element that reminds of the shape of the bulls horns.